The price of crude oil has remained stable even after the recent failure of OPEC and its allies to reach a deal. Brent, the global benchmark, rose 0.55% to $ 75.60 while West Texas Intermediate (WTI) rose 0.60% to $ 74.57. In a statement, the International Energy Agency (IEA) warned the industry faces conflicting fears of over and under supply. The report says the world will experience an oil supply shortfall if OPEC + does not reach an agreement for August supplies. At the same time, he warned that the new wave of the Delta variant will lead to lower demand. Countries like Spain, Australia and Japan recently announced measures to curb the spread of the disease. Another concern is that major oil producers could engage in a market share war, which, in turn, will affect the price.

The US dollar strengthened after the latest US consumer inflation data. According to the Bureau of Labor Statistics (BLS), the headline CPI rose 0.9% in June after rising 0.6% the month before. This increase led to a 5.4% year-on-year gain, which was better than the median estimate of 4.9%. At the same time, the core CPI which excludes volatile food and energy products rose 4.5% after rising 3.8% in May. These numbers show that consumer prices continue to rise in the United States, which will likely put pressure on the Federal Reserve at the next meeting. The last few minutes showed that some FOMC members were starting to think about tapering.

The Australian dollar was little changed after the government announced a new plan to support the economy as it sees more cases of Covid. In a statement, the Prime Minister of the country said the government would provide more than $ 400 million to New South Wales as it battles the new wave. The government will also extend the JobKeeper program for people who have lost more than 8 hours or a full day of work. The currency also reacted to the latest strong Chinese trade figures. The data showed that the country’s exports and imports increased by 32.2% and 36.7% respectively. The total trade surplus increased by more than $ 6 billion to reach $ 51.53 billion.

EURUSD fell to an intraday low of 1.1840, which was lower than the intraday high of 1.1882. Price appears to form a breakout and retest pattern after breaking out above the upper side of the descending channel. It also formed an inverted head and shoulders pattern, which is usually a bullish signal. It is slightly below the 25-day moving average. Therefore, the pair will likely resume the uptrend as the bulls target the next key resistance at 1.1920.

AUDNZD hit a high of 1.0725 which was significantly higher than last week’s low of 1.0660. The weakly traded pair recently broke bullish above the yellow trendline. It has also moved above the 50% Fibonacci retracement level as the RSI is on an uptrend. It also moved between the middle and the top of the Bollinger Bands pattern. Therefore, the pair will likely continue to rise as buyers target the next key resistance at 0.7400. 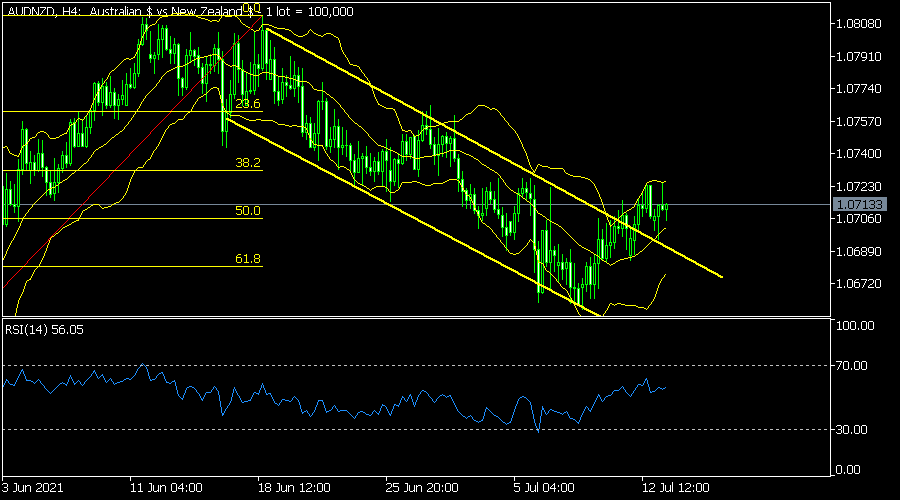 The USDCHF tilted higher after the latest inflation data from Swiss producers. On the two hour chart, the pair has formed a bearish flag which is shown in red. It also fell below the 25-day moving average as the Relative Strength Index (RSI) continued to rise. It is also slightly above the 38.2% Fibonacci retracement level. Therefore, the pair will likely resume the downtrend later this week. 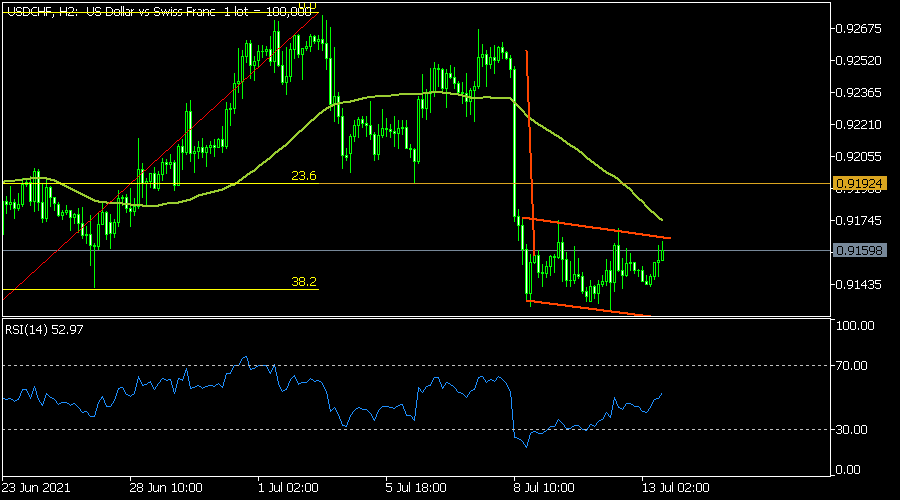